Food in Xuzhou is good. I will say it. Food is very, very good. Food is weird. I’ve had pigeon eggs, duck blood, ox throat. Dog is available in the supermarket…

But it is good.

Should you get bored of Xuzhou’s extreme cuisine, there are surprisingly a lot of ‘international’ places. 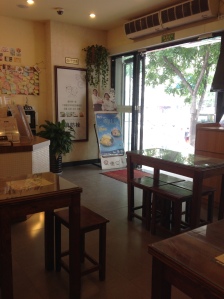 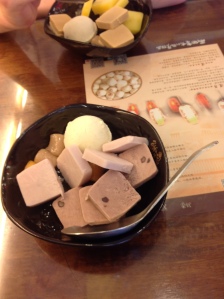 THIS PLACE is located near a supermarket in the city center. Ah, so vague. I don’t even know the name. But it sells the best (and only) Taiwanese dessert I have ever had.
It’s so bizzare, and it sounds gross, but it’s not. The purple blocks are made out of taro root. The black stuff underneath is rice. (Wot?) And that white stuff…that’s a pig brain.

No, it’s just ice cream. But this stuff is good. At £2.50 a bowl, it’s pretty expensive for Chinese standards (We got two full ducks at a duck restaurant for £2.50 between 6). But it’s worth it. Perfect for the crippling 40 degree heat. 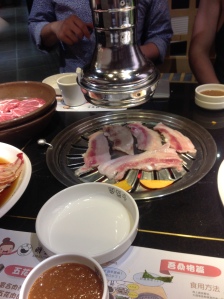 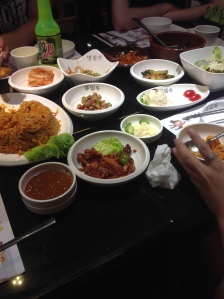 A lie I was told before coming to China; “The Chinese are SO healthy, ALL they’re meals are based on vegetables.”
I have not seen one lettuce leaf, a slice of onion or an asparagus tip since I got here. Those who know me will know what a blow the last one is.
That was until the bosses took us out for Korean BBQ. This is basically a lot of spicy veg, and pork wrapped in a lettuce leaf! It was to die for. It was fresh. Only the rice was fried. It was so good. So. So good. I have no idea, sadly, where this place was…a long taxi trip away. But the Korean Restaurant was adorable! Little tables, plant features, AOA blasting – I have heard a surprising amount of Kpop while I’ve been here (hooray!). And as someone who’s into Kpop, I finally got to try kimchi for the first time (omgsogood).

Again, this was a little expensive…oh God, what am I saying, ALL of this was £4.50 per person. 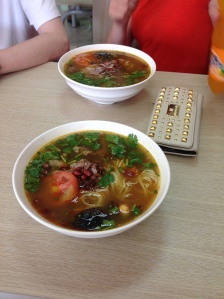 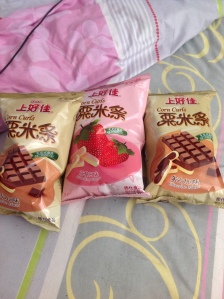 Over the road from the school is this little noodle bar. This noodle soup is delish. Don’t let the pigeon eggs put you off. This hearty bowl will set you back £1.

The next photo…these are a gift from heaven. How do I describe these corn puffs of deliciousness. They’re basically Wotsits. Without the cheese. Instead they’re coated with a strawberry or chocolate icing. Please God, let there be SOMEWHERE that sells these in Sheffield. Low on the cals. Max on the joy. And for 30p a pop…it would be rude not to.